It is useful for a number of purposes, including:

There are a number of alternatives to tmux that offer similar functionality:

Here are the four most common tmux commands:

Note: These commands assume that the default tmux prefix (CTRL + b) is being used. If you have changed the prefix in your tmux.conf configuration file, you will need to use the appropriate prefix in place of CTRL + b. 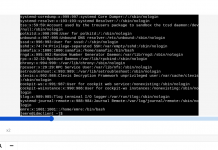