Big Data is the buzz word circulating in IT industry from 2008. The amount of data being generated by social networks, manufacturing, retail, stocks, telecom, insurance, banking, and health care industries is way beyond our imaginations.

Before the advent of Hadoop, storage and processing of big data was a big challenge. But now that Hadoop is available, companies have realized the business impact of Big Data and how understanding this data will drive the growth. For example:

• Manufacturing sectors need not depend on the costly mechanisms for quality testing. Capturing sensors data and analyzing it would reveal many patterns.

• E-Commerce, social networks can personalize the pages based on customer interests.

Big Data has many useful and insightful applications.

Hadoop is the straight answer for processing Big Data. Hadoop ecosystem is a combination of technologies which have proficient advantage in solving business problems.

Let us understand the components in Hadoop Ecosytem to build right solutions for a given business problem. 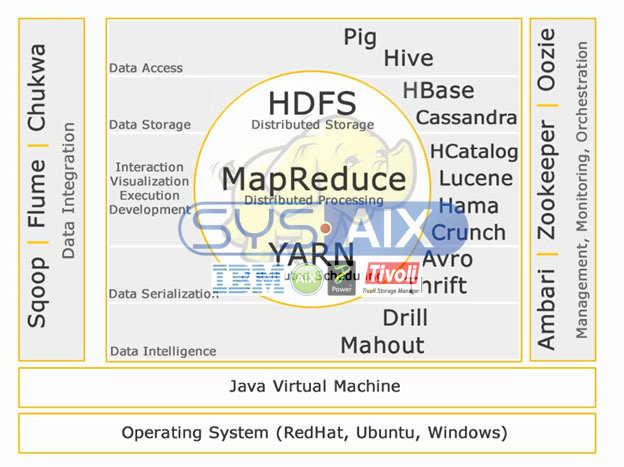 HDFS is the well known for Big Data storage.

YARN stands for Yet Another Resource Negotiator. It is also called as MapReduce 2(MRv2). The two major functionalities of Job Tracker in MRv1, resource management and job scheduling/ monitoring are split into separate daemons which are ResourceManager, NodeManager and ApplicationMaster.

Apache Pig is a high level language built on top of MapReduce for analyzing large datasets with simple adhoc data analysis programs. Pig is also known as Data Flow language. It is very well integrated with python. It is initially developed by yahoo.

Pig scripts internally will be converted to map reduce programs.

Apache Hive is another high level query language and data warehouse infrastructure built on top of Hadoop for providing data summarization, query and analysis. It is initially developed by yahoo and made open source.

Hive queries internally will be converted to map reduce programs.

If you want to become a big data analyst, these two high level languages are a must know!!

Apache HBase is a NoSQL database built for hosting large tables with billions of rows and millions of columns on top of Hadoop commodity hardware machines. Use Apache Hbase when you need random, realtime read/write access to your Big Data.

• Is a consistent and partition tolerant system in CAP theorem.

Cassandra is a NoSQL database designed for linear scalability and high availability. Cassandra is based on key-value model. Developed by Facebook and known for faster response to queries.

HCatalog is a table management layer which provides integration of hive metadata for other Hadoop applications. It enables users with different data processing tools like Apache pig, Apache MapReduce and Apache Hive to more easily read and write data.

Apache LuceneTM is a high-performance, full-featured text search engine library written entirely in Java. It is a technology suitable for nearly any application that requires full-text search, especially cross-platform.

Apache Hama is a distributed framework based on Bulk Synchronous Parallel(BSP) computing. Capable and well known for massive scientific computations like matrix, graph and network algorithms.

Apache crunch is built for pipelining MapReduce programs which are simple and efficient. This framework is used for writing, testing and running MapReduce pipelines.

Apache Avro is a data serialization framework which is language neutral. Designed for language portability, allowing data to potentially outlive the language to read and write it.

Thrift is a language developed to build interfaces to interact with technologies built on Hadoop. It is used to define and create services for numerous languages.

Apache Drill is a low latency SQL query engine for Hadoop and NoSQL.

Apache Sqoop is a tool designed for bulk data transfers between relational databases and Hadoop.

• Import and export to and from HDFS.

• Import and export to and from Hive.

• Import and export to HBase.

Flume is a distributed, reliable, and available service for efficiently collecting, aggregating, and moving large amounts of log data.

• Simple and flexible Architecture based on streaming data flows.

• Scales to thousands of nodes.

• Should be able to store data indefinitely.

Ambari is designed to make hadoop management simpler by providing an interface for provisioning, managing and monitoring Apache Hadoop Clusters.

• Supports several types of Hadoop jobs such as Map-Reduce, Hive, Pig and Sqoop.

• Simple and easy to use.